Business is-a-booming for the global shipping industry. Accounting for a majority of world trade, the players in the field are driven, competent and will leave no stone unturned to achieve their numbers and expand their businesses. However, they may not always employ the best practices in their pursuit for profits. And in turn, there are agencies in the industry that allow a certain level of “convenience”, always affecting seafarers in the worst way.

Flags of Convenience (FOC) have been in practice since the late 1920’s in the United States when shipowners, frustrated by increased regulations and rising labour costs, began to register their ships to Panama. Ships registered under flags of convenience can often reduce operating costs or avoid the regulations of the owner’s country. A vessel owner will find a nation with an open registry, or a nation that allows registration of vessels owned by foreign entities. A ship operates under the laws of its flag state, so vessel owners often register in other nations to take advantage of reduced regulation, lower administrative fees, and greater numbers of friendly ports. In 1968, Liberia grew to surpass the United Kingdom as the world’s largest shipping register and, as of 2009, more than half of the world’s merchant ships were registered with open registries, with Panama, Liberia, and Marshall Islands flags accounting for almost 40% of the entire world fleet as calculated by tonnage.

According to Ship Inspection, companies opt for Flags of Convenience (FOC) for the following reasons:

(1) Foreign corporations can register a ship without being established in the territory. (2) Where a company is required to be formed in the State, there are low formation costs. (3) The beneficial ownership of the ship may remain anonymous. (4) Low taxation and other fiscal incentives. (5) No special crew nationality or employment requirements. (6) Relaxed ship age limit. (7) No minimum ship tonnage requirement. (8) Dual registry is allowed in some cases (vessel registered under one country, but simultaneous registry permitted on bareboat charter registry of another country). (9) All IACS (and sometimes other) classification societies permitted to conduct surveys. (10) Speedy and simple registration procedures.

Although this seems like an ideal situation, there are drawbacks to FOC and these have a direct impact on crew. Marine Insight states, “Today, maximum seafarers working on ships belong to countries such as Philippines, Ukraine, China, Bangladesh, Pakistan, and Sri Lanka, and are employed on flags of countries such as Belize, Marshal Islands etc. One of the main issues faced by the shipping industry today is the emergency of registries such as Belize and Marshal Islands. Every one of us would have seen advertisements claiming to issue COC and CDC of Belize and Marshal Islands expeditiously. However, it is to note that the recruitment and training of seamen has been vitiated because of the emergence of such registries. Advertisements in prominent newspapers about recruitment of seafarers from unknown and improperly registered entities are increasing. Under the Maritime Shipping (MS) Act, it is our duty to eradicate such unscrupulous recruiters, trainers, and issuers of documents; but it is quite evident that we are failing miserably.”

Opensea.pro reveals, “Flags of convenience are generally considered as registries of lower quality than the closed registries and this is because of their relaxed requirements as well as the room they give to the shipowners to employ seamen of any nationality. In the past, the gap in quality was surely higher since the control for the implementation of the International regulations was mainly based on the flag states and the shipowners could take advantage of their relaxed approach.”

“To the shrewd ship owner, there aren’t a lot of disadvantages to flying a FOC aside from reputational disadvantages, which in and of themselves can be a problem. The disadvantages are mostly to the seafarers, for whom fewer securities are guaranteed by law when working on board a ship that’s registered in a FOC jurisdiction. Workers’ protection laws and regulations are rarely enforced in open registries. Screening of workers is also more relaxed, which can affect shipowners as well as workers in that less qualified staff can be certified. The International Transport Workers’ Federation is a global union with over 4.5 million members. It has a division just for maritime called ITF Seafarers. The ITF Seafarers campaigns against FOCs because they see them as hurtful to the industry and safety of workers,” Streber deducts.

The main issues faced by seafarers due to FOC include: lower standards of working conditions, no proper definition of basic rights, manipulation of records facilitating illegal trade, no proper pay scale, no proper protection during accidents and incidents, violation of compulsory rest periods and premature termination resulting in a lack of future prospects. 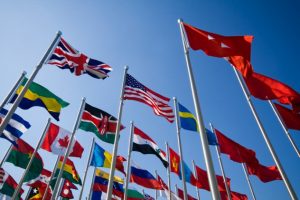 Everyday, however, things are becoming more streamlined and a lot of ship registries are gravitating towards smarter and safer shipping. They are not only employing better rules and regulations to protect the interests of seafarers, but also, smarter shipping technologies to ensure they keep abreast of developments in the ever-changing, dynamic shipping industry. However, the choice of which registry to go with remains in the hands of the ship owners.

LR report finds operators could save by leveraging technology