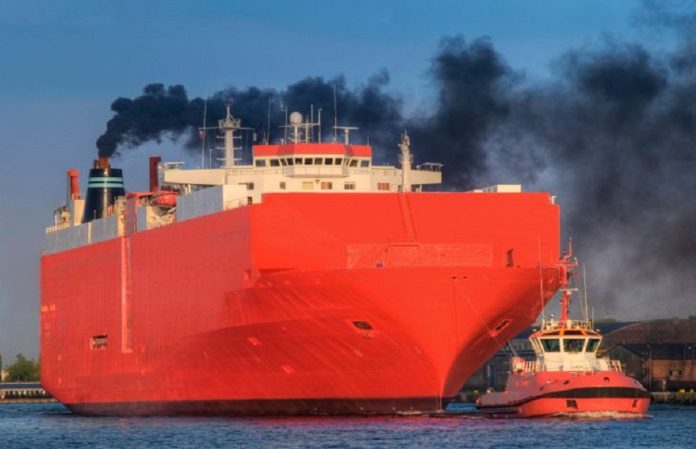 Nitrogen Dioxide (N02), upon inhalation reaches the lungs and converts into nitrous and nitric acid, which are highly irritating and cause damage to lungs. An exposure of 0.06-0.1 ppm of N02 for two years causes acute respiratory disease. Though nitric oxide is not considered to be that hazardous to health, ambient concentrations of nitrogen dioxide are toxic. Nitrogen dioxide and nitric oxide are referred to together as oxides of nitrogen (NOx). When nitrogen is released during fuel combustion, it combines with oxygen atoms to create nitric oxide (NO). This further combines with oxygen to create nitrogen dioxide (NO2).

Out of the total global air emissions, shipping accounts for 18 to 30 percent of the nitrogen oxide. The process of formation of NOx is simple. Marine fuel in an internal combustion engine is burnt inside the combustion chamber by the correct mixture of fuel and air in the presence of heat or an ignition source. The ignition source in the marine engine is the compression stroke of the piston, after which, the combustion starts. As air is a mixture with 21 per cent Oxygen and 78 per cent nitrogen, nitrogen reacts with oxygen under certain engine operating conditions, which leads to the formation of nitrogen oxides or NOx.

There are four major factors behind the formation of NOx in marine engines – high cylinder temperature and pressure, heavy load on the engine, improper air and fuel ratio for combustion and poor quality of fuel. The cellular lipids from NO2 oxides form bonds with haemoglobin, which reduces the efficiency of oxygen transport and disrupts the cellular enzyme system. About 500-600 parts per million (ppm) N02 inhalation for a period of two to 10 days, results in pulmonary haemorrhage, lung cancer and gum-inflammation. Besides human health, high levels of NOx can have an adverse impact on vegetation, including leaf damage and reduced growth. It can make vegetation more susceptible to disease and frost damage.

NOx ‘Tier III’ emission standards are 80 per cent less than NOx Tier I emission standards. The emission value for a ship’s diesel engine is to be determined as per the ‘NOx Technical Code 2008’ in the case of Tier II and Tier III limits. The Tier III limits prescribed by MARPOL Annex VI are as follows: for engine speed less than 130 rpm – 3.4 gNOx/kwh, for engine speed 130 and above but less 2000 rpm – 9*n-0.2 gNOx/kwh and for engine speed above 2000 rpm – 2 gNOx/kwh. The position of dual-fuelled and gas burning engines with regard to the requirements of the NOx Code have been something of a grey area. In order to clarify this, the Marine Environment Protection Committee (MEPC)258(67) redefines the term Marine Diesel Engine in MARPOL Annex VI.

Norway is a good example of an individual state taking action against NOx. Although it does not place a limit on NOx production, since 2007 all ships with a main engine above 750kw which produce NOx are subject to a levy.
To check the NOx in shipping sector, the International Maritime Organisation (IMO) has a string of guidelines. These include compliance with the provisions of Annex VI and is determined by periodic inspections and surveys. After passing the surveys, a ship is issued an ‘International Air Pollution Prevention Certificate’, with a validity of five years.

In accordance with the ‘NOx Technical Code’, a ship operator and not the engine manufacturer, is responsible for non-compliance. However, there are certain areas which need pertinent attention to arrest NOx emissions globally. The existing norms for controlling each of the different pollutant (gases) require different treatment and controlling some can affect the production of others. Industry experts have opined that adherence to the regulation of exhaust gases and their emission limits should be more stringent to check the menace of NOx emissions.

Besides, shipping firms should take keen interest in engine component modification. The designs can be improved to reduce the NOx formation during the combustion process. Integrating a slide valve type fuel injector with negligible sack volume eliminates any chance of fuel dripping and after burning, leading to cylinder temperature and NOx formation. Incorporating modern (emission-control) designs such as the Green Ultra long stroke engine from MAN (GME series) with reduced mean piston speed gives more time for excess air and proper combustion to lessen NOx formation.

Additive Manufacturing market to shrink, then rise to Over USD 10Bn