The global 0.50% sulphur cap will enter into force in 2020, and more than 70,000 ships will be affected by the regulation. Stricter limits on sulphur (SOx) emissions are already in place in Emission Control Areas (ECAs) in Europe and the Americas, and new control areas are being established in ports and coastal areas in China. As a result, ship owners are weighing their options to ensure compliance.

What will the new global limit mean for ships?

Under the new global cap, ships will have to use fuel oil on board with a sulphur content of no more than 0.50% m/m, against the current limit of 3.50%, which has been in effect since 1 January 2012.

The interpretation of “fuel oil used on board” includes use in main and auxiliary engines and boilers.

Exemptions are provided for situations involving the safety of the ship or saving life at sea, or if a ship or its equipment is damaged.

Another exemption allows for a ship to conduct trials for the development of ship emission reduction and control technologies and engine design programmes. This would require a special permit from the Administration(s) (flag State(s)).

For Compliance, there are four choices available:

What is the current average sulphur content of fuel oil used on ships?

HOW WILL THE GLOBAL SULPHUR CAP AFFECT SHIPPING?

Beyond the expected environmental footprint, enforcement of the global sulphur cap will also have other implications on shipping, ranging from increased fuel costs and a different fuel mix to a change in the operational patterns of ships and the impact on asset values.

Impact on GHG and other emissions

The compliance options available for the global sulphur cap will have an impact on the GHG and NOX emissions of ships. Further regulation of GHG emissions, beyond the EEDI requirements, is on the IMO’s agenda after the strategy was agreed recently in April 2018. Therefore, the compliance choices made today may affect compliance with future regulations on GHG reduction. In a similar manner, depending on the technology selected for the global sulphur cap, there may be an impact on choices available for compliance with NOX Tier III standards.

Switching to MGO, distillates or blended fuels will maintain GHG and NOX emissions at current levels, while using scrubbers with HSFO will result in a small increase in fuel consumption, of the order of 3 to 5%, and a corresponding increase of GHG emissions. Compliance with NOX Tier III standards can be achieved by using Selective Catalytic Reactor (SCR) or Exhaust Gas Recirculation (EGR) systems, but in both cases the installation will be more complicated when combined with a scrubber.

At the same time, using LNG will result in a reduction of GHG emissions of 10 to 20%, depending on engine technology. Low-pressure gas engines have a certain amount of methane slip, therefore reducing the potential GHG benefits, but they offer compliance with NOX Tier III levels. High-pressure systems eliminate methane emissions, but require the use of SCR or EGR for NOX reduction to Tier III levels. Other alternative fuels, such as biofuels or hydrogen, can lead to even more drastic GHG emissions reduction, depending on how these fuels are produced. Depending on the fuels and combustion characteristics, NOX reduction systems may be required.

Implementation of the global sulphur cap continues to generate countless discussions about future low-sulphur fuel availability as well as its possible price development. Predicting the future fuel price is indeed a challenging task, but it is widely expected that the transition to a higher-grade fuel will most likely result in substantially higher fuel costs for the industry.

The cost of different grades of fuel has traditionally closely correlated to the price of oil. However, such correlation should not be used for the future predictions. Increased blending will lift the demand for distillates, subsequently changing the historic correlation and most likely driving prices upwards. At the same time, lack of demand for HSFO can drive its price downwards. Thus, we may in the future observe a widening gap between two competing fuel solutions, with HSFO (combined with scrubber) setting the bottom price and MGO representing the upper level.

During the implementation of the SECA areas, most operators simply switched to MGO/MDO fuels. A similar trend of much higher magnitude is expected towards 2020, therefore increased MGO prices are inevitable in the short term. As the production of low-sulphur-blend hybrid fuels (0.50% sulphur) is gradually introduced, we may observe the prices of distillates eventually levelling off. However, if a substantial price differential between traditional HSFO and compliant fuels persists over time, the alternative solutions, such as scrubbers or using LNG as ship fuel, may prove to be the preferred solution.

Fuel availability in ports is another area of concern for ship owners and operators. In particular, the trends concerning the availability of 0.50% sulphur cannot currently (as of August 2018) be predicted, since many refineries are still developing these products. HSFO availability is also a concern for those installing scrubbers. While a lot of HSFO will be available as a by-product of refinery processes, it may not be available in many ports due to lack of demand. It is, however, expected that HSFO will be available in all major bunkering locations.

The expected increase in fuel costs leads many industry stakeholders to believe that a certain degree of speed reduction will be observed to reduce operating expenses. The focus on energy efficiency measures will also be intensified for the same reason. Fuel-efficient vessels will be more competitive, while vessels with scrubbers installed may have a significant competitive advantage. It is expected that, initially, vessels with scrubbers will be able to secure premium charter rates. However, if most vessels in a specific segment install scrubbers, daily rates will be lowered. Those vessels that do not have a scrubber yet may be forced to reduce their rates to unsustainable levels, eventually driving them out of the market. It is therefore very important for owners to monitor the competition in their segment to ensure that they are not left behind.

The substantial investments required to remain competitive under the global sulphur cap regime, combined with expenses related to ballast water treatment systems, may render older vessels unprofitable to maintain. This could lead to higher scrapping activity, and subsequently a renewal of the fleet with modern, more efficient vessels. This trend could also accelerate the introduction of alternative fuels, such as LNG.

Marine insurance will also be affected by the upcoming sulphur regulations. Insurance providers are concerned about the potential of engine damages, loss of propulsion and other ensuing problems that could be caused by the introduction of new fuel products that are still not well understood. Furthermore, there is potential for voyage disruption and delays due to lack of compliant or compatible fuel at a bunker port, or due to mechanical failures caused by poor bunker fuel quality. Marine cargo insurers are expected to revise their policies to cover such cases, where the cargo is not damaged but is significantly delayed due to issues related to the global sulphur cap. These new challenges may lead insurers to accept the risks by increasing their premiums, reflecting the uncertainties of the new reality.

Charter party clauses relating to bunkers will also need to be reviewed to avoid disputes. A notable example are prices of different fuels: when a charterer, who takes delivery of a vessel, is also buying bunkers on board and re-sells them to the owner upon re-delivery. During the transition to the sulphur cap, there can be a big difference in fuel prices, and this risk must be accounted for in the charter party. Other risks include, among others, the unavailability of compliant or compatible fuel and the performance varying due to fuel quality.

What controls will there be once the new global cap takes effect?

Ships taking on fuel oil for use on board must obtain a bunker delivery note, which states the sulphur content of the fuel oil supplied. Samples may be taken for verification.

Ships must be issued with an International Air Pollution Prevention (IAPP) Certificate by their Flag State. This certificate includes a section stating that the ship uses fuel oil with a sulphur content that does not exceed the applicable limit value as documented by bunker delivery notes or uses an approved equivalent arrangement.

Port and coastal States can use port State control to verify that the ship is compliant. They could also use surveillance, for example air surveillance to assess smoke plumes, and other techniques to identify potential violations.

With the global 0.50% sulphur limit approaching fast, owners are taking action to ensure they are prepared for 2020. This is reflected in the DNV GL statistics for scrubber orders. As of August 2018, more than 1,200 ships had either installed or ordered scrubbers to be installed by 2020, as illustrated in Figure 9. More than half of these orders were placed in the spring/summer of 2018. Many more ships are expected to order scrubbers in the following months, but the question is when these systems will be installed, with many manufacturers, yards and providers of sensors and emissions analysers already working close to full capacity. In any case, it is expected that fewer than 2,000 ships will have scrubbers installed by 2020, requiring the rest of the fleet to rely on compliant fuel. The industry – including banks, financial institutions, charterers and owners – seem to be willing to invest in a scrubber in return for the potential benefits from the expected savings in the fuel bill.

Until early 2018, most scrubbers had been installed or ordered for cruise and passenger vessels operating in ECAs. As many as 50% of these systems were closed-loop or hybrid designs, to ensure operation in restricted areas such as certain ports in North America. These trends were reversed in the last few months. As shown in Figure 10, bulk carriers, tankers and container ships are the three segments with the most scrubbers ordered. Open-loop systems are by far the most popular design now, due to their relative simplicity, particularly for retrofitting on existing vessels.

The number of ships using LNG as fuel is increasing as shown in Figure 11, and more and more infrastructure projects are planned or proposed along the main shipping lanes. In line with this dynamic development, DNV GL expects LNG to grow even more rapidly over the next five to ten years. Furthermore, LNG is commercially attractive and available worldwide in quantities able to meet the fuel demand of shipping in the coming decades. LNG as fuel is especially expected to increase for vessels frequently operating in the North American and northern European waters with existing or upcoming NOX requirements. An increase in compliant-fuel prices relative to LNG will encourage operators to invest in LNG.

Alternative fuels, such as methanol and biofuels, are expected to only be able to serve a minor share of the market in the short term. They will be an alternative in some local areas, where the supply fits trading patterns for vessels. Looking farther into the future, hydrogen as fuel, with fuel cell technology combined with batteries, is an emerging alternative, particularly for small ships operating in fixed routes and with a secured energy supply. 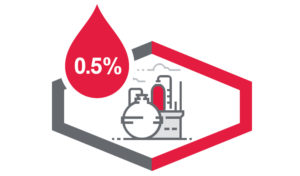