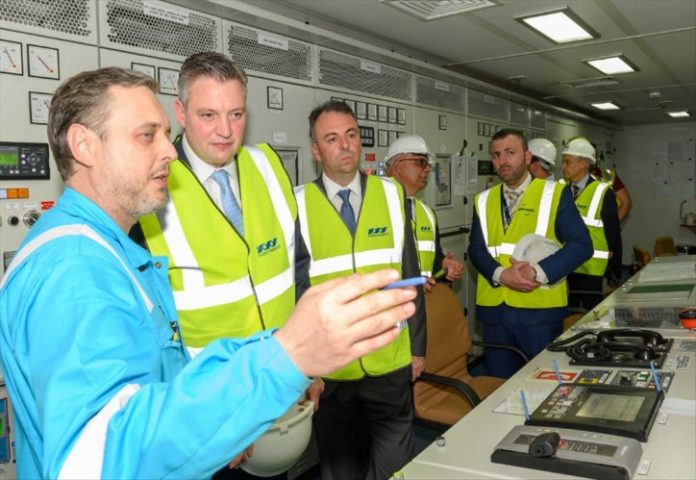 Malta Freeport Terminals welcomed the first ever LNG-powered container ship to visit Malta during the course of the vessel’s maiden voyage from Asia to Rotterdam. Tourism Minister Konrad Mizzi, whose portfolio includes the Freeport Authority visited this ship to mark this special event.

The use of LNG is fast gaining attention as it will reduce sulphur oxide emissions by 90 to 95 per cent as well as reduce costs.

Malta Freeport Terminals CEO Alex Montebello said: “Malta Freeport reiterates its commitment towards the environment and supports CMA CGM’s initiatives to reduce the carbon footprint of its vessels.  CMA CGM, one of Malta Freeport’s shareholders, has been a pioneer in environmental protection and has implemented numerous initiatives to make its fleet more eco-responsible. By 2022, the Group will have taken delivery of 20 vessels powered by LNG.”

Dr Mizzi said:  “Ever since I was entrusted to take under my responsibility the Malta Freeport, together with the entities and stakeholders involved, we created several initiatives to improve our environment and the standard of living of the people of Birzebbuga. By attracting to our country container vessels of this type, we are moving a step ahead towards cleaner seas and a better environment.  This complements other initiatives such as the regeneration of the promenade, afforestation in the Benghajsa
area, the recreational park and multi-storey carpark on which works will start shortly, sound-friendly cranes, a double glazing scheme, and several opportunities that we will be proposing and implementing in the best interests of the people living in the vicinities.”

Last week Malta Freeport announced  a new service between the Mediterranean, the Caribbean and the US, showing its ambition to consolidate its status as one of the most efficient and agile ports in the Mediterranean region.

Malta Freeport has also invested €31 million over the past year in 15 Kone Rubber-Tyred Gantry Cranes (RTGs) — which are safer and faster to operate — as well as in other yard equipment including 67 new tractors and trailers.

The Freeport currently provides network links to 115 ports around the world, 59 of which are in the Mediterranean.