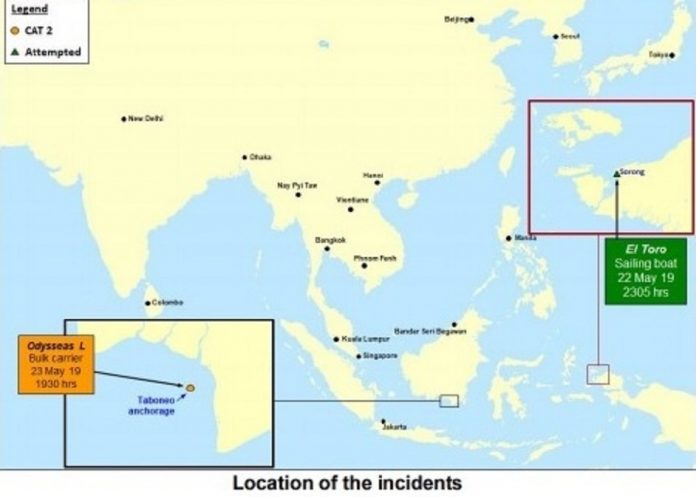 During 25 Jun -1 Jul 19, one Category 21 incident and one attempted incident of armed robbery against ships in Asia were reported to ReCAAP ISC. The Category 2 incident occurred at Taboneo Anchorage, Kalimantan, Indonesia on 23 May 19 when perpetrators armed with knives boarded a bulk carrier, confronted the crew, stole ship stores and escaped. The attempted incident occurred off Pulau Doom, Sorong, Indonesia on 22 May 19 whereby a perpetrator tried to steal the dinghy of a sailing boat. The locations of the incidents are shown below, and description tabulated in the attachment.

SITUATION OF ABDUCTION OF CREW IN THE SULU-CELEBES SEAS

Update on the abduction of crew from two fishing boats on 18 Jun 19 On 18 Jun 19, the ReCAAP ISC issued a Warning, followed by an Incident Alert about the abduction of 10 fishermen from two fishing boats by a group of gunmen in the waters of Lahat Datu, Sabah, Malaysia. On 21 Jun 19, the Philippine Coast Guard (PCG) reported to the ReCAAP ISC that nine men believed to be the abducted crew were found by the authorities of the Talipao Municipal Police Station at Bgy Kahawa, Talipao, Sulu.

The abducted crew was released by the abductors who could have realised that the abducted crew had no money nor anything to give as ransom. On 24 Jun 19, the abducted crew escorted by police authorities departed Jolo, Sulu for Zamboanga City for a joint debrief by the Philippines authorities. The Southwestern Mindanao of the PCG interviewed the abducted crew and reported to the ReCAAP ISC that nine of the crew from the two fishing boats (instead of 10 crew as early reported) had been abducted. With the release of the nine crew, there is no crew being held in captivity.

As the risk of the abduction of crew in the Sulu-Celebes Seas and waters off Eastern Sabah is high as demonstrated by the abduction incident on 18 Jun 19, the ReCAAP ISC reiterates its advisory issued via the ReCAAP ISC Incident Alert dated 21 Nov 16 to all ships to reroute from the area, where possible. Otherwise, ship masters and crew are strongly urged to exercise extra vigilance while transiting the area, and report immediately to the Operation Centres of Philippines and Eastern Sabah Security Command
(ESSCOM) of Malaysia. The contact details of the Operation Centres of Philippines and ESSCOM of Malaysia (updated by ReCAAP ISC on 3 Jan 19) are as follows: