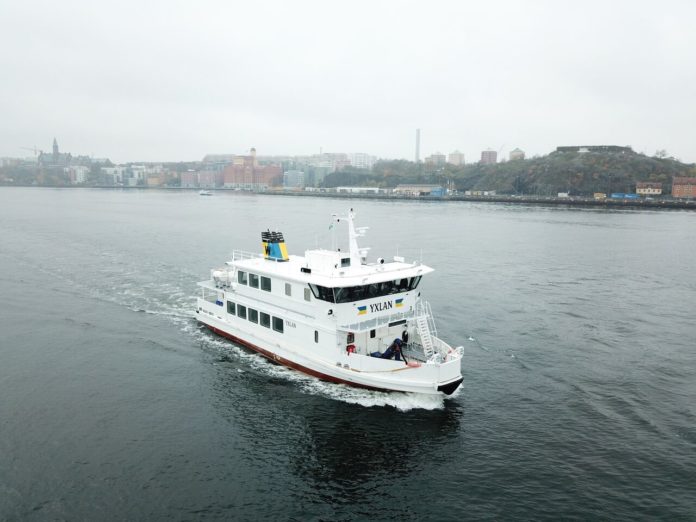 Stockholm shipping company Waxholmsbolaget has launched its first hybrid ice-going passenger ferry, powered by innovative hybrid electric propulsion by Danfoss Editron Oy. The 27.5m vessel, designed and built by Baltic Workboats, is serving the Stockholm archipelago (Sweden) and is built to transport up to 150 passengers at a time.

The electrified ice-class ferry will help the city of Stockholm achieve its target of becoming a fossil fuel-free city by 2040, while providing more comfortable transportation for passengers with lower noise and vibration levels.

As the ferry will be operating all-year-round, it has been specifically designed to be able to operate in ice up to 25cm thick. The vessel operates with two diesel engines and a battery pack, creating a hybrid power plant providing clean power to propulsion. With good weather conditions, the ferry can operate with one diesel engine and the battery pack system, further minimizing emissions. The hybrid propulsion system is integrated into a single common unit controlled by Baltic Workboats’ monitoring and alarm system. The vessel is also equipped with an exhaust cleaning elective catalyst reduction system to further reduce emissions.

The vessel is equipped with a Danfoss Editron marine system, which consists of two hybrid drivetrains with permanent magnet electrical motors and generators. The system is half the size of a conventional, diesel-electric propulsion system, making it the most compact and lightweight on the market. EDITRON’s highly-efficient permanent magnet machines cut fuel and running costs, resulting in significantly reduced CO2 emissions and payback period.

Peeter Raamat, Head of Technical Department at Baltic Workboats, commented: “A hybrid vessel was the perfect choice for the city of Stockholm. The ferry will have to operate across all seasons, so we needed a system that would enable the crew to switch to diesel-electric or batteries in case of engine failure.

We chose to work with Danfoss Editron because their marine system is robust yet lightweight, plus delivers high efficiencies. Their equipment is also really compact, which is a crucial factor to consider when building small hybrid vessels.”

This is the second partnership between Danfoss Editron and Baltic Workboats, following the delivery of a hybrid patrol ship to the Estonian border authorities earlier this year.

Kari Savolainen, Project Manager at Danfoss, said: “As countries adopt regulations to advance towards carbon neutrality, we can expect demand for such hybrid electric solutions to grow rapidly. Electrifying marine transport is set to become a key trend and Scandinavian countries are leading the way.

We have found a strategic partner in Baltic Workboats that puts us on the front line of development, and we are looking forward to working together with them on future projects.”

Decarbonizing maritime transport has become both a major challenge and ambition for the industry, since the International Maritime Organization adopted a strategy to reduce at least 50% of greenhouse gas emissions from the global shipping sector by 2050. Sweden is at the forefront of decarbonizing marine transport. In 2015, the Swedish Shipowners’ Association became one of the first shipping associations worldwide to commit to zero-carbon shipping by 2050.