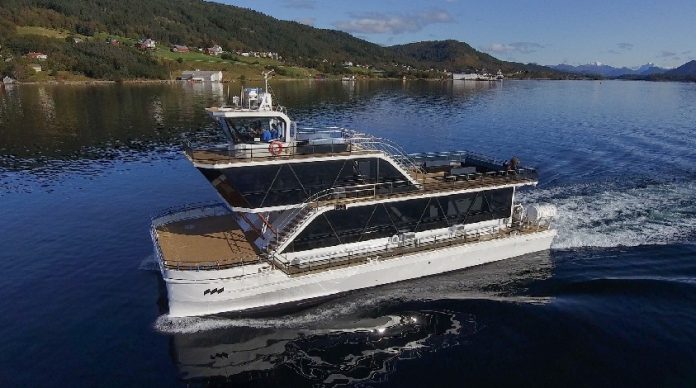 With environment being the new buzzword, the cruise industry is now taking a leap forward with new designs and ships that will facilitate a sustainable world. Diving deep into the pristine waters of Tromsø, Brim Explorer, the world’s first ultra-modern clean tourist vessel has begun taking visitors out in Norway following an official launch ceremony.

While hundreds of people gathered to witness the event taking the opportunity to appreciate the unique hybrid electric vessel designed specifically to meet growing environmental requirements now and in future, the event allowed tourists to witness the peaceful beauty of the North Norwegian Fjords. The silent beauty of the region can truly be appreciated when the vessel is propelled by batteries alone, eliminating the noise and vibration of a normal ship engine running on diesel.

Explaining the process of being inspired to build a new generation of boats, Agnes Arnadottir, chief executive and co-founder of Brim said, “It has been super rewarding even though it has been hard work,” said. “We now know every single part, every nut and bolt, on this ship.”

Agnes founded the company two years ago with Espen Larsen-Hakkebo, chief financial officer of Brim. The duo was responsible for bringing in the NOK 46 million (USD 5.2 million) financing for a project which he says entailed enlisting a shipyard and suppliers to deliver a uniquely aesthetic design and ultra-clean propulsion system.

“We have had to do things from scratch, including financing the project, using so much innovative design and technology,” he informed. “But now we have delivered the first electric ship for northern Norway and we can start twice daily tours from Tromsø.”

The aluminium hulled vessel with huge windows and observation platforms can take up to 140 passengers out on sustainable whale watching and sightseeing tours, powered by a battery system supplied by Corvus Energy.

Investor support for designing a vessel from scratch rather than adapting an existing design has allowed Agnes and Espen to build a vessel that meets their own goals, as well as the tightening societal and regulatory requirements for shipping.

One of the benefits for the vessel design will be the ease with which its batteries can be recharged – the vessel will need only a 400V 124 amp industrial power outlet to do so.

From the shipyard Maritime Partner, CEO Peder Myklebust has described the project as “a series of innovations in both hull design and propulsion as well as its characteristic design” and that the great collaboration with Brim made it possible to solve challenges together.

Brim already has a second vessel nearing completion and set to enter service in Spitsbergen on the remote northern island of Svalbard. This will be the first ultra-clean vessel specifically built to Polar regulations.  The vessel will be operated in conjunction with the Norwegian cruise and ferry operator Hurtigruten, allowing passengers and guests from Hurtigruten to enter waters that may be off limits to other cruise goers.