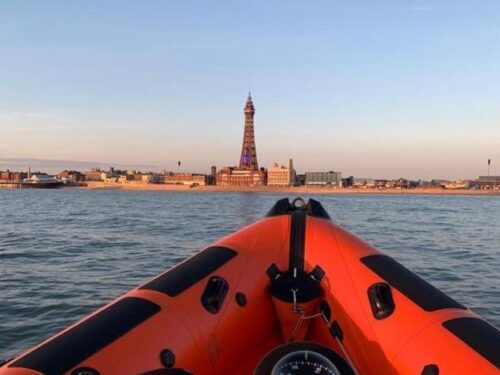 A person was spotted struggling in the water near South Pier yesterday evening (May 20).

Volunteers at RNLI Blackpool were paged shortly after 8.30pm and immediately launched one D-class lifeboat and an Atlantic 85-class lifeboat.

As they arrived at the scene the person was being helped to safety by Lancashire Police and Lytham Coastguard.

A spokesperson for Lytham Coastguard said: “We were called out at 8.32pm to reports of a person in the water around the South Pier area.

“On arrival we found the person, and Blackpool Police and ourselves assisted them out of the water.

A spokesperson for RNLI Blackpool Said: “Our RNLI volunteers were called out at 8.30pm this evening when a person was spotted in the sea near South Pier.

“One D class and our Atlantic 85 lifeboat launched but fortunately the casualty was helped to safety as they reached the scene.”

The incident comes after HM Coastguard launched a new safety campaign yesterday (May 20) urging parents to protect their families by following key safety advice to save lives this summer.

A spokesperson for HM Coastguard said: “Following the recent easing of nationwide lockdown restrictions in England and with children still off school, many more people are expected to visit the coast to exercise and take part in water-based activities.

“Last weekend alone, coastguard rescue teams were called out 194 times in the UK to incidents including; inflatables drifting offshore, crashed jet skis, people injured while out walking or cycling along the coast, paddleboarders, kayakers, windsurfers and kite surfers in difficulty and people cut off by the tide.

“Whilst RNLI lifeboat crews and HM Coastguard are still on call ready to respond to emergencies, the message is clear; we need the public to be aware of dangers, take responsibility for themselves and their loved ones and remember that, in an emergency, call 999 and ask for the Coastguard.”

Europa Air & Sea has successfully launched the first part of its innovative, bespoke IT solution LeoSea