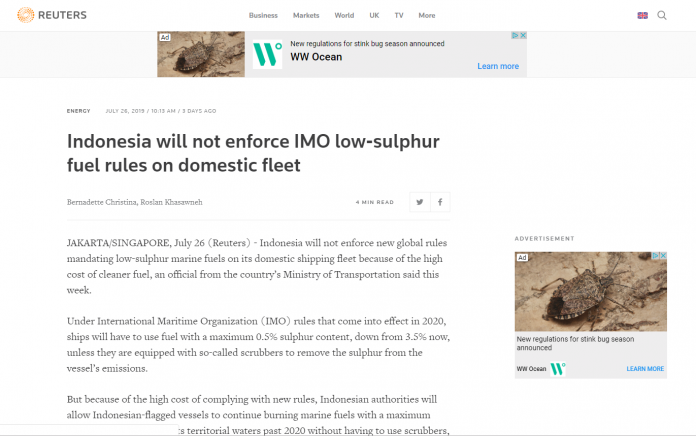 Reuters have reported that Indonesia will not enforce IMO low-sulphur fuel rules for its domestic fleet.

Indonesia will not enforce new global rules mandating low-sulphur marine fuels on its domestic shipping fleet because of the high cost of cleaner fuel, an official from the country’s Ministry of Transportation said this week.

Under International Maritime Organization (IMO) rules that come into effect in 2020, ships will have to use fuel with a maximum 0.5% sulphur content, down from 3.5% now, unless they are equipped with so-called scrubbers to remove the sulphur from the vessel’s emissions. *

This follows on from New Zealand who is still considering whether to sign up or not to MARPOL Annex VI and it is receiving some resistance to signing up internally. As a non-signatory New Zealand would have no obligation to enforce IMO2020. Again citing the cost as the stumbling block to signing. New Zealand is still asking for a phased implementation which the IMO has strongly stated will not happen.

It will be interesting who else will join Indonesia and New Zealand, there are rumours but nothing concrete yet.